I have mixed feelings about blogging on the topic of the 10th anniversary of the September 11, 2001 terrorist attacks.  There is such a fine line between commemorating the nation’s resilience, loss of lives, and heroic responses and celebrating the success of the terrorists.

I thought I would write about where I was when I heard the news, how I ran to the school to bring my children home, how the busy skies around our house were silent when air travel halted. But every time I thought about rehashing all of it, I wondered about the point of those memories.

We’ve heard the words, “Never Forget” so many times but how can anyone who lived through it forget? It’s impossible.

One of the images stuck in my head is my burly  brick mason brother hearing the news at a construction  job site then later, sitting on a curb opening his metal lunchbox, and putting his head in his hands and sobbing.

We all have these kinds of images stored in our memories. We don’t need reminders about what it was like on that day, and all the days that followed.

I remember listening to President Bush address the nation, and crying through the entire speech. It was one of the most eloquent speeches I’ve ever heard. 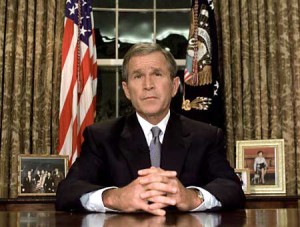 So whether you like George Bush or “don’t love him” like my mom, I think his speech deserves remembering:

“In the normal course of events, Presidents come to this chamber to report on the state of the Union. Tonight, no such report is needed. It has already been delivered by the American people.

We have seen it in the courage of passengers, who rushed terrorists to save others on the ground — passengers like an exceptional man named Todd Beamer. And would you please help me to welcome his wife, Lisa Beamer, here tonight. We have seen the state of our Union in the endurance of rescuers, working past exhaustion. We’ve seen the unfurling of flags, the lighting of candles, the giving of blood, the saying of prayers — in English, Hebrew, and Arabic. We have seen the decency of a loving and giving people who have made the grief of strangers their own. My fellow citizens, for the last nine days, the entire world has seen for itself the state of our Union — and it is strong.

Tonight we are a country awakened to danger and called to defend freedom. Our grief has turned to anger, and anger to resolution. Whether we bring our enemies to justice, or bring justice to our enemies, justice will be done. I thank the Congress for its leadership at such an important time. All of America was touched on the evening of the tragedy to see Republicans and Democrats joined together on the steps of this Capitol, singing “God Bless America.” And you did more than sing; you acted, by delivering 40 billion dollars to rebuild our communities and meet the needs of our military. Speaker Hastert, Minority Leader Gephardt, Majority Leader Daschle, and Senator Lott, I thank you for your friendship, for your leadership, and for your service to our country. And on behalf of the American people, I thank the world for its outpouring of support. America will never forget the sounds of our National Anthem playing at Buckingham Palace, on the streets of Paris, and at Berlin’s Brandenburg Gate.

We will not forget South Korean children gathering to pray outside our embassy in Seoul, or the prayers of sympathy offered at a mosque in Cairo. We will not forget moments of silence and days of mourning in Australia and Africa and Latin America. Nor will we forget the citizens of 80 other nations who died with our own: dozens of Pakistanis; more than 130 Israelis; more than 250 citizens of India; men and women from El Salvador, Iran, Mexico, and Japan; and hundreds of British citizens. America has no truer friend than Great Britain. Once again, we are joined together in a great cause — so honored the British Prime Minister has crossed an ocean to show his unity with America. Thank you for coming, friend.

On September the 11th, enemies of freedom committed an act of war against our country. Americans have known wars — but for the past 136 years, they have been wars on foreign soil, except for one Sunday in 1941. Americans have known the casualties of war — but not at the center of a great city on a peaceful morning.  Americans have known surprise attacks — but never before on thousands of civilians. All of this was brought upon us in a single day — and night fell on a different world, a world where freedom itself is under attack.

After all that has just passed — all the lives taken, and all the possibilities and hopes that died with them — it is natural to wonder if America’s future is one of fear.  Some speak of an age of terror. I know there are struggles ahead, and dangers to face. But this country will define our times, not be defined by them. As long as the United States of America is determined and strong, this will not be an age of terror; this will be an age of liberty, here and across the world.

Great harm has been done to us. We have suffered great loss. And in our grief and anger we have found our mission and our moment. Freedom and fear are at war.  The advance of human freedom — the great achievement of our time, and the great hope of every time — now depends on us. Our nation, this generation will lift a dark threat of violence from our people and our future. We will rally the world to this cause by our efforts, by our courage. We will not tire, we will not falter, and we will not fail.

It is my hope that in the months and years ahead, life will return almost to normal.  We’ll go back to our lives and routines, and that is good.  Even grief recedes with time and grace. But our resolve must not pass. Each of us will remember what happened that day, and to whom it happened. We’ll remember the moment the news came — where we were and what we were doing. Some will remember an image of a fire, or a story of rescue. Some will carry memories of a face and a voice gone forever.

And I will carry this: It is the police shield of a man named George Howard, who died at the World Trade Center trying to save others. It was given to me by his mom, Arlene, as a proud memorial to her son. This is my reminder of lives that ended, and a task that does not end. I will not forget this wound to our country or those who inflicted it. I will not yield; I will not rest; I will not relent in waging this struggle for freedom and security for the American people. The course of this conflict is not known, yet its outcome is certain. Freedom and fear, justice and cruelty, have always been at war, and we know that God is not neutral between them.

Fellow citizens, we’ll meet violence with patient justice — assured of the rightness of our cause, and confident of the victories to come. In all that lies before us, may God grant us wisdom, and may He watch over the United States of America. Thank you.”

To me, that is worth remembering.

4 thoughts on “Worth Remembering”