I’m sitting on the deck of our beach house in the Outer Banks trying to read a book.

As I read the words on the page, my mind drifts in and out with the sound of the waves and the gusts of wind that sweep my hair from one side to the other.

One word on the page stands out to me — “Returning.”

How many times have I returned to this beach?

I’ve been here for family vacations, girls’ weekends, writing retreats, and many work trips where we removed wallpaper, repainted rooms, replaced bedding, cleaned windows and blinds, and dusted the masts on decorative sailboats.

There hasn’t been one trip that I haven’t remembered a story my friend Brian told me on my first trip here many years ago. It was called The Turn of the Tide written by Arthur Gordon.

It’s a story about a man who went to his doctor complaining of depression, malaise, unhappiness, and stress. The doctor listened to his long list of complaints, and then asked, “Where were you happiest as a child?”

The man replied, “At the beach. We had a summer cottage there.”

The doctor then instructed him to go to the beach alone. He said he could take a lunch but shouldn’t read, listen to the radio or talk to anyone. Then, he tore off four prescription forms, wrote a few words on them and said to read one every three hours.

He followed the doctor’s orders and drove silently to the beach. When he got there, he unfolded the first prescription. It said, “Listen carefully.”

Listen to what? He wondered.

Then, he noticed the steady roar of the ocean, the creaking cries of gulls, even the soft rasp of drifting sands. Gordon said on an impulse he ducked down and thrust his ear into a clump of sea oats where he noticed if he listened intently, “there is a fractional moment in which everything seems to pause. In that instant of stillness, the racing thoughts halt…the mind rests.”

He realized that for the first time in a long time, he was thinking of things bigger than himself, which brought him great relief.

At the next three-hour mark, he unfolded another prescription and it said, “Try reaching back.”

He tried to bring back his happy memories from his childhood, visualizing people from his past – their voices, laughter, dress, and gestures.

He remembered a fishing trip with his younger brother who had later died in World War II. He realized that if he closed his eyes he could see him with amazing vividness and even remember his humor.

He thought, “Happy people were usually assured, confident people. If, then, you deliberately reached back and touched happiness, might there not be released little flashes of power, tiny sources of strength?”

He became defensive – “There’s nothing wrong with my motives. I want to be successful, who doesn’t? I want a certain amount of recognition, but so does everybody. I want more security than I’ve got – and why not?”

Then heard a timid voice in his head said, “Maybe those motives aren’t good enough.”

The more he thought the more he realized that maybe he was looking past the job itself and focusing only on the financial rewards it could bring. The work had become a means to an end, a way to make money and pay bills. He had lost the sense of giving something to the job, of helping people and making a contribution. 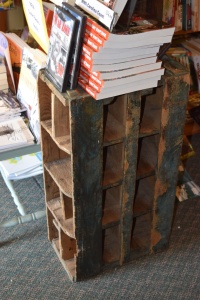 The last piece of paper said, “Write your worries in the sand.”

He picked up a fragment of a shell and wrote his troubles in the sand. Then he walked away because the tide was coming in. Of course it washed away his worries and took them out to sea.

Write your worries in the sand.

In all my returning to this little village by the ocean, I’m privileged to enjoy some of these gifts of the sea. And who doesn’t need an occasional dose of clarity, perspective, and stillness, and maybe a refreshing Turn of the Tide?

1 thought on “Turn of the Tide”