I’ve debated whether to share this embarrassing experience, but here goes…

That’s not even the embarrassing part.

After Weight Watchers, I went to the car repair shop, the grocery store, and Costco.

When I got home, I realized I never took off my Weight Watchers nametag. 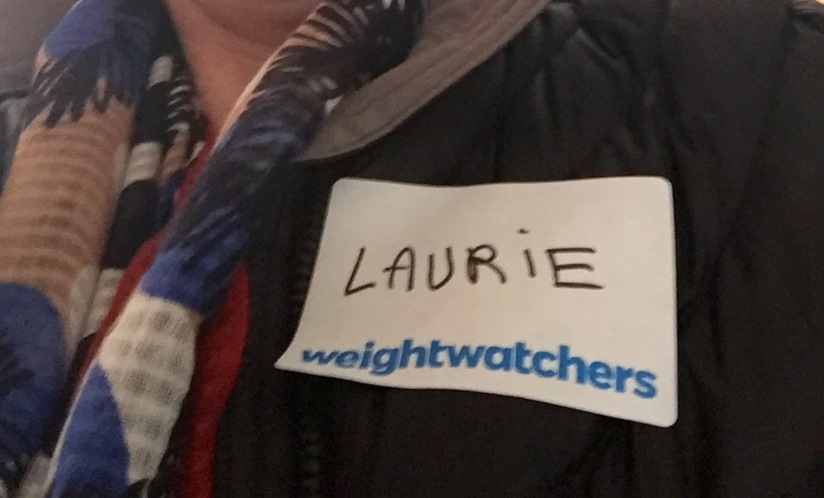 Hello world! My name is Laurie.

I am a Weight Watcher.

I try not to advertise this because, for me, living the WW lifestyle is like slogging through mud.

Progress is slow and imperceptible, which makes talking about it very unpleasant.

How much have you lost?

How long have you been on it?

And that’s all you’ve lost?

How much do you want to lose?

How long is it going to take you?

The rest of my life and into eternity, thank you very much.

Now let me back up to the Weight Watcher meeting that launched my horrible, no good, very bad day.

We were challenged to fit indulgences into our eating plan.

The logic is if you eat what you love, you won’t feel deprived and quit.

A lot of people said they eat a piece of Dove chocolate for their daily dose of deliciousness. 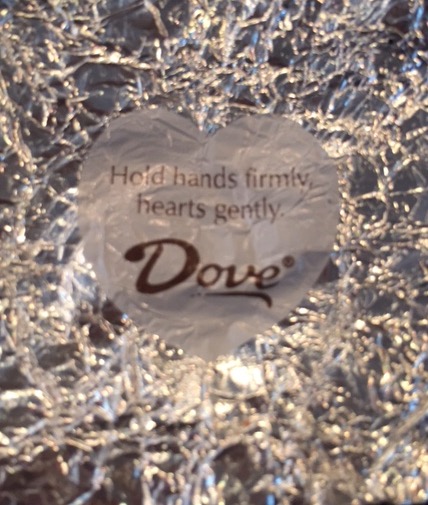 I left the meeting determined to eat chocolate.

So now, let’s review what happened in light of the WW Chocolate Challenge.

First, at the car place, the friendly customer service guy told me his life story.

He’s part Iranian, part Turkish, and married a Latino. They have a five-month old baby girl, and said she’s a pretty good sleeper. He showed me pictures of her on his phone.

And, can you believe he hasn’t been to Turkey since he was two years old? He wants to go back soon.

As you can see, we established some rapport over the counter while discussing my wiper blades, oil change and tire rotations.

So, you think he might have mentioned the nametag, right?

As I was leaving to get my loaner car, he said, “Do you want a snack from the snack room? We have some chips and candy bars.”

Remembering the chocolate challenge, I caved at the word “candy,” and took the fun-sized SNICKERS for the road.

But, wait a minute.

He saw my big old nametag, didn’t know about the chocolate challenge, and, still offered me candy and chips?

You call that good customer service?

Next up is the grocery store, where, of course, I rose to the morning’s WW challenge and bought a bag of Dove Promises.

I can only imagine what that clerk thought as she scanned it, while noticing I looked like a Weight Watchers billboard.

Then there was Costco.

I wish I could say I ignored the old people in hairnets handing out food samples.

I sampled a chip with guacamole on one aisle, a pretzel on the next, and ended with a sip of yogurt before I left.

Again, I can only imagine what people thought as they saw me stuffing myself with snacks while sporting that not-so-subtle WW nametag.

My errands ended up costing me a good number of WW points, and a lot of embarrassment.

Later, that afternoon, Mr. Snickers Saboteur called to tell me my car was ready for pick-up.

“It’s very important to me that you give me a 10 on the customer service survey. So, is there anything else I can do to make sure you’re satisfied with our service?”

“Wait a minute. Did you see the badge I was wearing?”

“So, you saw the WW nametag, let me leave still wearing it, and gave me a Snickers?”

I hung up the phone and thought, “what’s the matter with people?”

It should be a rule that if customers come in wearing WW nametags, you should tell them before they embarrass themselves by eating things like chocolate and chips and guacamole while wearing a flashing neon sign that says, “I’m a Weight Watcher.”

No, that man handing out Snickers to Weight Watchers members is definitely not getting a 10 because if I blame him, I feel a little less embarrassed…