As many of you know, my daughter Annie spent part of the summer in Africa.

She came home on a Thursday. Her boyfriend, Josh, flew here Friday and stayed at her friend’s house.

Then, Saturday morning, he surprised her by proposing at Eastern Market on Capitol Hill.

If I’d had any doubts about this marriage idea before, they were quickly washed away when I saw the joy in Annie’s face when she spun around to see him standing behind her with a bouquet of sunflowers.

Notice I wrote that “if” I’d had any doubts. That is different from I “had” doubts.

I’ve been thinking about this proposal for a while now as we plotted and schemed about the best way to pull it off.

As Annie became closer to this boy, friends would ask, “Are you okay with this?”

What do you say to that question?

I said, “I trust Annie,” which is true. She doesn’t make important decisions lightly. Ever.

But, what does it take for a mother to really be “okay” with her 20-year-old daughter getting married? 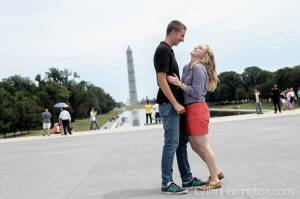 Since I’ve known about this pending engagement, I’ve felt like Steve Martin in the movie, “Father of the Bride” when he looks at his daughter after she announces she’s getting married, and he see’s a six-year-old telling an engagement story. (Similar to how I felt when she said she was going to Africa!)

In the abstract, I’d imagined me scrutinizing every facet of the boy’s life, character, family, and personality.

I know it’s cliché but, every parent wonders if anybody will ever be good enough for their child.

I mean, we’re talking about my Annie here, my baby girl, born with all that wild hair all over her head, the one who was so cute the doctor kept dropping by my hospital room just to hold her and play with her hair. In fact, she said, she’d never seen a cuter baby. (I had a different doctor when Sara was born or she would have said Annie was as cute. A mother always has to cover her bases, you know.)

Dr. T. thought Annie looked like she’d stopped at a heavenly hair salon for some highlights before coming to earth.

Does this boy who wants to marry her know what she means to me?

Does he know that when she was in pre-school and sang, “You are my Sunshine,” that my heart melted like a popsicle in the hot sun?

That girl’s happiness means more to me than words can ever describe.

So, again, how does a mother get “okay” with her daughter getting married?

It’s like putting my heart and hers in the palm of a stranger’s hand and saying, “Be careful with it,” and then praying like crazy he knows how much I mean it.

Before Annie left for Africa she said Josh wanted to talk to Doug to ask his permission.

“In our family, he needs to ask the mother too,” I said.

I knew Doug would be too much of a soft touch. If anyone was going to do the scrutinizing and deep, investigative reporting, it would have to be me.

I had my opportunity for this big talk a few weeks ago when Josh and I went to lunch.

A weird thing happened at that lunch.

Even though I was armed with questions, and had ignited my full-on mother radar , a softness took over me, and my goal became to see Josh as Annie saw him.

I received a beautiful gift and sensed the humble, sweet spirit of a young man who truly adores my baby girl.

So, when she said “Yes” to him at Eastern market, so did I.

I’m okay with this.

I’m okay with him.

I’m more than okay. I’m excited because I can see why he chose her; and why she chose him.

And, this mother is quite okay.

But, Josh, always remember, she was my sunshine first…