I miss my dad. 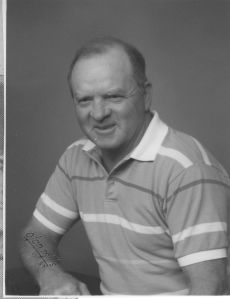 It’s been 21 years since I heard his voice, felt his strong hugs, and smelled the Old Spice Aftershave on his cheeks.

What I wouldn’t give for a conversation with him.

Sometimes I imagine him showing up, like when I’m walking on the beach by myself, thinking about him.

As I walk past the fishermen on the beach, I remember how my dad struck up conversations with anybody and everybody holding a fishing pole.

“Are they biting? What are they taking?” He’d ask.

Before long, he knew a bit about everybody and a lot about where the fish were biting, and what bait they were taking.

I try to imagine how a conversation would go with him if I saw him fishing by the shore.

Maybe I’d start by asking whether he’s getting any nibbles on his fishing line.

But, that small talk would not be enough.

I’d probably pepper him with questions that were too big to answer.

I imagine me asking them so fast that he couldn’t answer one before I was on to the next one.

Then, I visualize him smiling and shaking his head at me, and saying, “You still can’t slow down, can you?”

It reminds me of the story about when I was born.

It was October when my mom called my dad from their little two bedroom apartment in Utah to tell him she was in labor with me, and he said, “Now? But it’s the opening of the deer hunt!”

As the owner of the town dairy, Dad had just finished his home delivery route and I’m sure he was ready to start cleaning his hunting rifle or seasoning his Dutch oven for his campfire dinners.

“To hell with the deer hunt,” Mom said. “This baby’s coming whether it’s the hunt or not, so you better get yourself home now and get me to the hospital.”

Even with the deer hunt looming, he dutifully drove his milk truck back to the dairy, parked it, got into his red Chevy pickup truck and headed back to their apartment to pick up Mom.  He helped her up into the cab of the truck, and then hurried her to the hospital for the delivery.

Then he waited patiently in the lobby like a good fifties dad.

At the end of my birth story, he always said, “You were in a hurry to get here and you haven’t slowed down since.”

I’m sure he’d still think I haven’t slowed down, even though I’m always trying.

Aside from knowing what it’s like where he is, I’d want to know how he’s involved in our family life.

It doesn’t make sense that he wouldn’t still be involved.

I believe our family members are closer to us than we know, like our guardian angels.

Maybe God dispatches them to answer some of our prayers.

Jeffrey Holland, one of my favorite LDS apostles, said, “From the beginning down through the dispensations, God has used angels as His emissaries in conveying love and concern for His children.”

He said, “Usually such beings are not seen. Sometimes they are. But seen or unseen they are always near. Sometimes their assignments are very grand and have significance for the whole world. Sometimes the messages are more private. Occasionally the angelic purpose is to warn. But most often it is to comfort, to provide some form of merciful attention, guidance in difficult times.”

I believe my dad’s been around during some of my difficult times to give me some of that merciful attention.

How could he have stayed away during those long months I battled cancer?

How could he have stayed away when my brothers, sister, mom, or his grandchildren have needed comfort?

Elder Holland said,  “I testify of angels, both the heavenly and the mortal kind. In doing so I am testifying that God never leaves us alone, never leaves us unaided in the challenges that we face…On occasions, global or personal, we may feel we are distanced from God, shut out from heaven, lost, alone in dark and dreary places. Often enough that distress can be of our own making, but even then the Father of us all is watching and assisting. And always there are those angels who come and go all around us, seen and unseen, known and unknown, mortal and immortal.”

Because of this and my belief that my dad is one of those angels, I can confidently wish him a Happy Father’s Day and know he’s near enough to hear it ,and know I mean it.