Last week before my mom flew home to Utah after spending nearly two weeks visiting me in Virginia, my brother called her and said, “Hey, before you come home, I want you to track me down some of that Virginia moonshine whiskey I’ve been learning about on TV.”

“What moonshine whiskey?” she wanted to know.

He explained that it was a hooch made in Virginia and sold in Mason jars.

“Do you want me to end up in jail?” she asked. “They’d confiscate that at the airport and send me to jail. Then, you’d see my face all over the news. I don’t think I’ll be bringing any whiskey home.”

Since he struck out with Mom, he asked my sister to track down a bottle for him.

She ignored the request and shook her head, and rolled her eyes like we do when our brothers do something we think is absurd. (Keep in mind this is the same sister who sent me a placard that said, “If it’s not one thing, it’s your brother!”)

Trust Kelly to know all about moonshine whiskey and to find a docudrama on the Discovery Channel that tells stories about people who produce moonshine.

These people brew their own shine – often in the woods near their homes using camouflaged equipment, according to the Discovery Channel website.

When Mom got home, she went into her basement, dug out a Mason jar, poured straight vinegar into it, sealed the lid nice and tight, and asked my other brother to take it to Kelly and say she brought it with her from Virginia.

When Kelly saw the Mason jar full of brownish-gold liquid, his face lit up like when he was a kid and Santa brought him a BB gun on Christmas morning.

He couldn’t believe his good fortune. I can just imagine him thinking, “Most moms bring home little shot glasses as souvenirs, not my mom! She brings the whole bottle of whiskey!”

He called Mom immediately, “Where did you find it? How did you get it through airport security?”

The lies began spewing out of her so naturally that it made her a little nervous.

He said, “Boy, when I opened it up to take a whiff, it threw be back a little. That stuff’s potent.”

“I took a little swig just to see what it’s like. Boy, it’s got quite a bite! I still can’t believe you tracked it down and brought it home!”

“What if you had gotten caught?” he asked.

“Well, then I’d probably be sitting up at the point of the mountain,” she said, referring to the prison, “and you’d have to tell everybody I was a bootlegger, I guess.”

You know that story about lies don’t you? How you can never lie just once because to support the first lie, you have to tell another one, and then another one, until you are nearly a perpetual, pathological liar?

My mom found herself in that dangerous lying cycle, but she was having so much fun, she couldn’t stop.

“It’s terrible, isn’t it? But, I never imagined he’d think it was the real thing. So when he did, I just had to go with it. I couldn’t believe how easily all those lies spilled out of me.”

The next day when she talked to Kelly, he said, he’d hid the bottle at the back of the fridge so that nobody in his family would find it. He had him some special, illegal whiskey, and by golly, he was going to protect that stuff.

His wife asked Mom where she really got it. “It’s straight vinegar,” she confessed, “but don’t tell him. I’m having too much fun dragging this out.”

“Oh, believe me, I won’t!” his wife said, relishing the fun of it all.

“How am I going to get out of this?” Mom asked. “I can’t believe how I just piled one lie on top of another, and now I can’t bring myself to tell him the truth. I guess I’ll wait until April Fools Day now, but he’ll be so disappointed with the truth.”

I giggle every time I think of him appreciating and protecting his little mountain dew souvenir from Virginia.

I really can’t believe he didn’t know it was vinegar! I hate everything about vinegar. I can smell it from across the county, I think. Yet, he smelled it and tasted it, and still thought it was potent moonshine whiskey with a bite? Oh, my.

Moonshine whiskey must be some awful tasting, smelling stuff if it’s at all like vinegar.

For any of you who know my brother, Kelly, don’t spoil the fun by telling him what’s really in that Mason jar tucked into the back of his fridge. His reaction is sure to be priceless.

And can you imagine this sweet lady traipsing through the Virginia hills looking for moonshine? 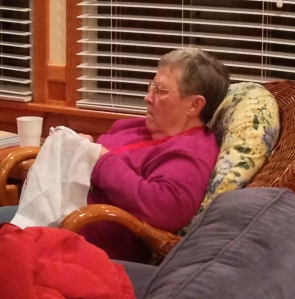 7 thoughts on “My Mom, the Bootlegger”